How to Have Hope at Christmas

We’ve heard the Christmas story a million times, but if we read it with fresh eyes and soft hearts we just might find ourselves in this magical tale. It begins in Israel:

When Herod was king of Judea, there was a Jewish priest named Zechariah. He was a member of the priestly order of Abijah, and his wife, Elizabeth, was also from the priestly line of Aaron. Zechariah and Elizabeth were righteous in God’s eyes, careful to obey all of the Lord’s commandments and regulations. They had no children because Elizabeth was unable to conceive, and they were both very old. Luke 1:5-7

This couple was righteous in God’s eyes—this means God had His eye on them! And yet… they had no children. This godly, righteous, obedient couple hadn’t been given the deepest desire of their pure hearts. They had been waiting for God’s grace for a long, long time.

I wonder if you can relate? Maybe you’ve done everything right, but life is still turning out wrong. Maybe you wonder if God is holding out on you. He knows the one thing your heart desires—a faithful husband to love you, a precious child to adore you, a secure job to support you. It’s a good dream – it’s not selfish or sinful or greedy – yet it remains just out of your grasp. Zechariah and Elizabeth would understand the ache deep in your heart.

One day Zechariah was serving God in the Temple, for his order was on duty that week. As was the custom of the priests, he was chosen by lot to enter the sanctuary of the Lord and burn incense. While the incense was being burned, a great crowd stood outside, praying. Luke 1:8-10

I don’t know when was the last time there was a community-wide prayer meeting in your hometown, but let me tell you—it’s hard to get a “great crowd” to show up these days! It’s even more impressive that the Jewish people of Zechariah’s day showed up since it had been a while since God had actually responded to their prayers. In fact, it had been over 400 years since they had heard a single word from God! In our Bibles, we turn one flimsy page between the Old Testament and the New Testament, but to the Jews, this little page represented 400 years of silence.

Yet still, they prayed. A great crowd of them prayed… for a long time… standing up! Confession time: it’s hard for me to pray for 400 seconds (that’s less than seven minutes)—let alone 400 years! I long to see what would happen today if we had the same fervor and commitment to prayer, and I admire Zechariah’s tenacity.

While Zechariah was in the sanctuary, an angel of the Lord appeared to him, standing to the right of the incense altar. Zechariah was shaken and overwhelmed with fear when he saw him. But the angel said, “Don’t be afraid, Zechariah! God has heard your prayer. Your wife, Elizabeth, will give you a son, and you are to name him John. You will have great joy and gladness, and many will rejoice at his birth, for he will be great in the eyes of the Lord. Luke 1:11-15a

I wonder if Zechariah and Elizabeth were still praying for a son. After all, the Scripture says they were both “very old.” They had probably given up on this dream a long time ago. When our dreams die, our prayers live on! Zechariah’s story assures me that every uttered prayer reaches God’s ear and touches His heart, even though He may not answer when I want in the way I expect.

When Zechariah’s long-held dreams were finally recognized, he had a hard time believing the angel’s promise:

Zechariah said to the angel, “How can I be sure this will happen? I’m an old man now, and my wife is also well along in years.” Luke 1:18

Other translations read, “How can I know this will happen? How can I be sure of this? How will I know this {for certain}?” Zechariah basically said, “Prove it to me!” Zechariah asked for a logical explanation and then he drew his own conclusion: “I am an old man… and, in case you haven’t noticed, I sleep with an old woman!” He would pay for his doubt with nine more months of silence.

Zechariah forgot that God specializes in the impossible. Newborn babies from old ladies are nothing for Him! He was about to bring forth a Savior from a virgin. He would soon turn certain death into eternal life—and the God of Christmas can still do the impossible in our lives today!

Every time Zechariah looked at his son, he was reminded of God’s faithfulness. As we wait and wonder when He will answer our prayers, and how it will happen and why—why?!—hasn’t it happened yet, it very well may be that the Lord is getting ready to do immeasurably more than all we could ask or imagine.

Now to him who is able to do immeasurably more than all we ask or imagine, according to his power that is at work within us, to him be glory in the church and in Christ Jesus throughout all generations, for ever and ever! Amen. Ephesians 3:20-12

5 Easy Ways to Love Your Neighbor this Christmas

The Ghost of Christmas Past

5 Christmas Gift Ideas for Your Neighbors

As you’re makin’ a list and checkin’ it twice, don’t forget to add your neighbors!   Here are five simple, powerful, and affordable gifts to share the joy of Christmas with the people living around you. Gifts open doors for natural connections that can lead to...
Read More

5 Ways to Love Your Neighbor at Christmas

How to Love Your Neighbor at Christmas for Introverts

Celebrate the season in your own special way!   Whether you're extroverted or introverted, a party animal or party pooper, God has intentionally placed you in your neighborhood to reach your neighbors in your unique way. As long as you are obedient and...
Read More

When "There's No Christmas Like a Home Christmas" hit the airwaves in 1950, less than 10% of homes contained only one person. Today, one in four of the homes on your street is occupied by a single person living alone. Twenty-five percent of people say they have no one...
Read More

Christmas in the Neighborhood

On that first Christmas morning, in that dingy stable, the King of Kings was born as a helpless baby. John 1:14 says, “…the Word (that is, Jesus) became human and made his home among us. He was full of unfailing love and faithfulness. And we have seen his glory, the...
Read More

Christmas it the BEST time of the year to love your neighbor!  Everyone loves to receive Christmas cookies, so why not make some plates for the homes on your street? I've seen God use this simple act in my own neighborhood to impact lives over the course of...
Read More

Guest post from Valley Community Baptist Church, Avon, Connecticut   Our church in New England isn't in the heart of the Bible Belt. This area is full of stoic people behind stone walls. Folks in our neighborhoods can even be hostile towards the Gospel. But that...
Read More

This simple craft is a fun and festive way to count down the days until Christmas while remembering the real reason we celebrate!   It’s made by removing the glass from an old photo frame, inserting Christmas paper, and gluing on a small clothespin to hold a card...
Read More

How to Love Your Neighbor this Christmas

“Instead of being a time of unusual behavior, Christmas is perhaps the only time in the year when people can obey their natural impulses and express their true sentiments without feeling self-conscious and, perhaps, foolish. Christmas, in short, is about the only...
Read More

In our Bibles, there is one flimsy, thinner-than-paper piece of paper between the Old Testament and the New Testament. In reality, this single page represents 400 years of silence as God withheld Himself from the world… from the end of Malachi in the Old Testament...
Read More

All was not calm, all was not bright in the dingy stable where they slept that first Christmas night. It will be a "Silent Night" in many homes on your street this Christmas because of loneliness. Christmas is the perfect time of year to break the silence and fulfill...
Read More

Friends from Far and Near (and Christmas Gift Ideas)

Last weekend [12/2013], I had the joy of spending time with so many incredible people! We dodged snowstorms to come together from all corners of the country, and God's Spirit made us instant friends as only He can do. Today I bought milk that expires after Christmas,...
Read More
×

How to Love Your Neighbor at Christmas 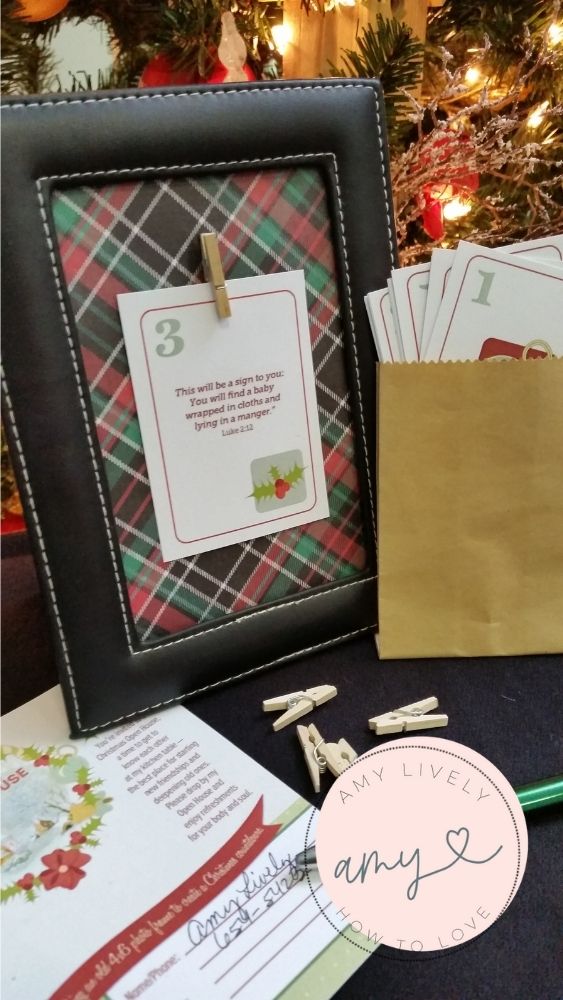 Check out my practical, adaptable tips and tools to offer extravagant hospitality – not extreme entertaining – to your neighbors this Christmas (yes, even for introverts!).

And everyone's favorite, a free Christmas Countdown Craft to share with your neighbors, friends, or family!

Free Christmas Gifts for you >>